•        Pomegranate: a symbol of resurrection and life everlasting in Christian art, the pomegranate is often found in devotional statues and paintings of the Virgin and Child. 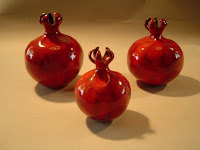 •       In medieval representations the pomegranate tree, a fertility symbol, is associated with the end of a unicorn hunt. The captured unicorn appears to be bleeding from wounds inflicted on him by the hunters. The “wounds” are actually pomegranate seeds dripping their blood red juices on his milk white body. Wild and uncontrollable by nature, unicorns can be tamed only by virgins. Once tamed, the unicorn was held in an enclosed garden and chained to a pomegranate tree, symbolizing the impending incarnation of Christ. 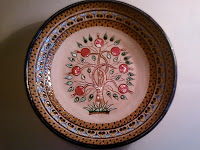 Posted by Armenian Ceramics at 3:55 AM

Armenian Ceramics
Various cultures represent pomegranates differently. In Greek myth, it represents regeneration, resurrection. In Judaism, pomegranate symbolizes fertility & eternity. Basically, in early Christian Art it represented eternal life and the many seeds were supposed to be the tree of life, Armenians consider it to be the symbol of life & fertility.

Anahit Makaryan
Anahit Makaryan actively introduced the elements of ancient Armenian manuscripts into souvenir ceramics, thus creating unparalleled examples of applies art, which are made in the spirit of medieval Armenian art. Teaching in the School of Art, she educates a new generation of potters.